Anyone can use any melee or thrown weapon to do one point of damage without an effect call. You may only deliver one point of damage per second and making blows faster than this is strongly discouraged as they will not cause additional damage and can be significantly less safe than well separated blows.

In the case of missile weapons (bows and crossbows) if you are hit by an arrow or a crossbow bolt, it is equivalent to an Impale call (does not need to actually be called) in addition to one point of damage.

Various magical and spiritual abilities may allow you and others to make other calls – but only one call per blow.

Any blow that squarely strikes any part of a person – with an accompanying call or not – causes the character to lose one hit. Grazing hits to extremities (e.g. fingers) do not count, neither do blows to clothing, armour flaps, or slung weapons or shields where they extend beyond the body.

If a blow is avoided or parried, i.e. a weapon or shield takes the blow, such that it does not strike the person, the call can be ignored by the target and the caller does not count it against the number of calls they can make. Do not attempt to parry arrows or bolts with a weapon (shields are permitted) as this can make them spin and strike others with the nock.

A resisted blow will still inflict a point of damage – no one can resist damage. 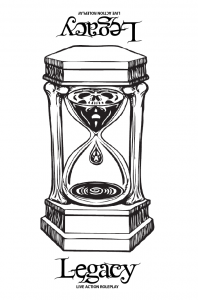 You may be handed a curse or death card by a Referee, or occasionally another player or monster who has a special ability to cause them.

If you already have a death card and are handed another death card, you are now dead – see ‘Death’ below.

If you already have a curse card and are handed another curse card, the curse with the longest duration replaces the shorter (or the newest one if they have the same duration) – hand the replaced curse back to a Referee, it does not take effect / ceases to be in effect.

While you are under the effect of a death card you also remain injured (zero hits) regardless of any healing attempts, unless stated otherwise on the card.

Everyone starts with 1 global hit and may increase their hits by wearing armour, having the Tough skill, or various other benefits earned in game.

If you reach zero hits, you are Injured.

You may stagger (slow walk), talk or drink a potion, but not fight or use any Active skills, blessings, curses or items. Also while in this state you count as Unresisting for the purposes of the Execute call, searching and carrying (see Safety and Interactions for rules on searching and carrying)

Further damage will not take you past zero. 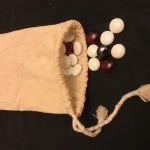 A character with the Healer skill may attempt to heal you without spending power. To do this, they must draw a bead from a referee, to determine if there are any lasting effects from your injury or if you return to full hits, in addition you must have spent a minimum period recovering. The recovery period is 10 minutes (or 1 minute if you have the Resilient skill) from the point you reach 0 hits and is restarted if you take further damage. The healing can occur at any point during or after the recovery period but hits will not be restored until the end of the period.

The colour of the bead indicates what happens next, and this is different depending on whether the healing (not the damage) takes place in Holy Ground or not:

Characters with the Healer skill may also perform any of the below free actions (provided they themselves are not Injured):

After 10 seconds of roleplay and the expenditure of one point of Power, a character with the Healer skill may restore a character’s hits to full without the need to pull a bead. This can be done even if they are in their minimum recovery period but not if they have a Death card.

An unresisting character is unable to stop certain IC actions occurring to them i.e. execute, searching, being carried (see Safety and Interactions for rules on searching and carrying). A character may choose to be unresisting, or may be forced into this state by being paralysed or being on zero hits. Taking a character by surprise does not count as them being unresisting.

If executed your character is dead, see Death below.

Any character may execute an unresisting person (i.e. on zero hits) with a full (obvious) blow – or set of blows – that takes at least 10 seconds to prepare and deliver (note this cannot be achieved within the duration of a single paralysis call). If you are not interrupted, you may call Execute at the end of the 10 seconds. Execute blows must follow the same safety guidelines as other blow e.g. do not stab unless the weapon is suitable for stabbing, do not draw weapons across skin etc.

A character with the Healer skill may also call Execute whilst treating an unresisting patient – this treatment must be at least 10 seconds, but only the patient (and Referee, if applicable) need to be made aware of the call.

So, your character is dead? This may not be the end 🙂 You may roleplay being a corpse for as long as you like and when you are done, use the hand in air signal to display that you are not getting up IC, find a Referee or go to GOD to find out whether your character is permanently dead or will go to the Underworld.

A player may decide to roleplay their character has died at any time. If they are injured or have a death card, the gods will treat that as the cause of death. If not then then they will be considered to have died from natural causes.

Poisons must be delivered by a blow from a poison coated weapon, arrow or bolt. Any blow that inflicts damage will deliver the poison to that target, after which time the weapon is no longer poisoned. Applying a poison requires a roleplay activity and if possible handing the poison card to a Referee, all poisons will last a maximum of 10 minutes after being applied to weapon after which time the poison is considered to be spent.

When using a poison you must inform a Referee who will deal with the effects of the poison on your target. This will generally be in the form of a death or curse card, depending on the nature of the poison.

Potions can only target an unresisting or willing person. To take a potion requires a roleplay activity (never actually drink the contents of any potion bottle as they may not be safe for consumption) and follow the instructions on the card. Unless stated otherwise on the card the effects are immediate and you should pass the card to a Referee at the earliest opportunity.

Some potions may grant a blessing, after taking one of these you must go to GOD at the earliest opportunity to swap the card for a blessing. If you are already under the effects of a blessing then follow the usual process for determining which effect remains.