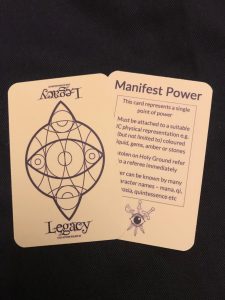 Power comes in two forms: Manifest Power is an actual physical item (with a game token showing it is Power); Personal Power comes from the Blessed skill, can only be used with your IC consent, and is an Active activity.

Do not feel you have to call it ‘Power’ – it is known by many names – mana, qi, ambrosia, quintessence etc.

Manifest Power is represented by printed cards which may be attached to a phys rep. It can take many forms, either liquid or solid – please be ready to provide your own phys rep for Manifest Power you are carrying. It can be earned by completing quests, monstering/crewing or trading IC. It may be spent on healing or spells in exactly the same way as Personal Power. It may be stolen but there are consequences for stealing it on Holy Ground

Spells or cantrips can only be cast by a character with the Invocation skill and is an Active activity.

The target(s) of a spell or cantrip must be IC willing or unresisting.

All spells or cantrips require an amount of Power to perform – this can be any combination of Personal or Manifest Power from one or more characters.

If the caster does not have enough Power available at the point of casting (plus any requisite resources), then the spell fails, the caster is reduced to zero hits and is Injured. They may also receive a death or curse card if the spell required a Referee to be present.

Cantrips are simple spells that do not require resources to cast, generally last only an hour and only affect a limited number of targets. When casting you should inform a Referee when possible and hand them any spent Power, but you do not have to wait for a Referee to become available before casting.

Spells are more complex and sometimes prohibitively expensive without the use of Resources. Their effects may last more than an hour or affect a larger number of targets. Casting spells that you know does not require a Referee, and you can exchange the used power and resources for any resulting blessings or item empowerment at GOD.

Experimenting with spells or resources that you only have unconfirmed IC information about does require a Referee.

There is no prescribed method for roleplaying your spell casting – we encourage you to develop a way which makes sense for your character and warband, and is appropriately dramatic for the scale of the effect.

If you already have an effect of that type on your character, the effect with the longest duration (or the newest one if they have the same duration) will take effect and the other will go away – if it is on a card, hand it back to a Referee.

Blessings with a duration longer than 1 hour require a card, which will be provided by a referee or at GOD. This card must be carried at all times while IC.

A character may renounce any blessing at any time – it will no longer affect the character, but will need to get it reapplied if they want it back.

Removing a Curse prior to the expiry of its duration can only be achieved by following the steps outlined on the curse card, or by replacement with a longer duration curse.

The Sunder call will suppress the effects of positive and negative magical effects, blessings and curses for ten minutes – they are still there, can still be replaced by an effect of longer duration, and curses can still be cured if the conditions are met, but the effects they were having on your character do not apply for that duration. Sunder has no effect on death cards.